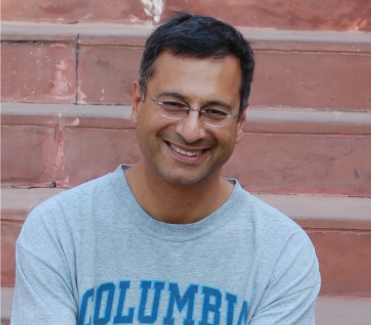 Beth Tzedec Congregation was pleased to invite Professor Tinu Ruparell to continue our fifth year of the Lil Faider Interfaith Scholar-in-Residence Project. Dr. Ruparell is an Associate Professor in Indian and Comparative Philosophy in the Department of Classics and Religion at the University of Calgary. Born in Kenya but raised primarily in Calgary, Tinu has degrees in Microbiology (BSc, University of Alberta), Philosophy (BA) and Religious Studies (MA) (University of Calgary) and Indian and Comparative Philosophy (PhD, University of Cambridge). He began his career as a lecturer and research fellow at Hope University and the University of Liverpool, eventually becoming co-director of Hope’s Centre for the Study of Science and Religion. In 2003 he returned to Calgary to take up his current position, and recently served as Head of the Departments of Religious Studies and then Classics and Religion. He has published widely in the areas of Philosophy of Religion, Indian Thought, Science and Religion, Multiculturalism and Inter-Religious Dialogue, and Cross-Cultural Interpretation. He is married to Donna and they have three children. In his spare time he runs a small software company and is a keen skier, sailor, cinemaphile, and cyclist.

Please see our videos from Professor Tinu Ruparell’s lectures below.